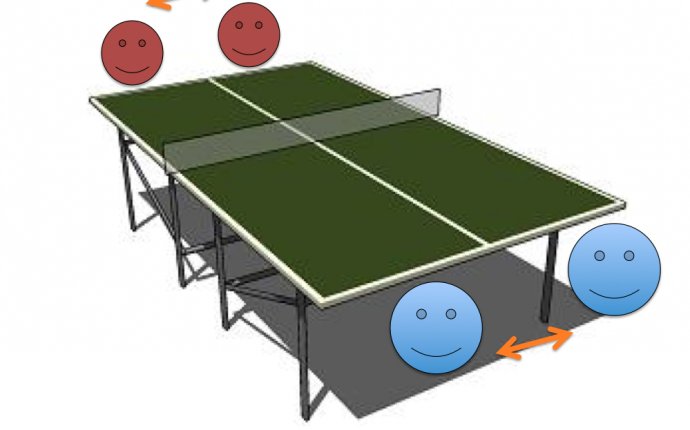 It is the act that initiates a rally in table tennis. It is the first stroke of each point. Some simply put the ball into play with a no frills, basic approach. Others vary the spin, speed and placement and use it strategically to dictate the action and induce their opponent to make a mistake. The serve in table tennis has evolved through the years as the sport has grown in popularity and rules have changed. It is interesting to note that the rules of service are one of the most often violated/least enforced rules in table tennis. Illegal serves are especially prevalent in smaller, local tournaments, but also do occur with regularity at the professional level. It is a problem that is often overlooked and it is everyone’s fault, from you the player, your opponent, to tournament organizers as well as referees and umpires.

The full, word-for-word explanation of the rules for legal service can be found in the International Table Tennis Federation (ITTF) Handbook – Laws of Table Tennis, Section 2.06 (The Service). In six easy steps, here are the keys to a legal serve in table tennis:

1. The ball rests freely in the open palm of the hand

Usually, you will see your opponent simply pick up the ball and immediately toss it, without pausing or allowing the ball to rest freely. Or the ball starts from the resting position in the server’s fingers, rather than palm. These two are the most frequent violations of this aspect of legal service. Here is a demonstration of how to do it correctly:

2. The ball is projected near vertically, at least 16 centimeters

This part of the rules seems to be the most often violated by players at all levels. Either the toss is not high enough or not vertical. Non-vertical tosses can be seen when a server tosses the ball back towards his or her racquet. For a great example of a non-vertical toss that hardly ever gets penalized is Russian table tennis professional Alexander Shibaev. Compare Shibaev’s poor toss to Kenta Matsudaira’s excellent toss in their recent World Cup match. I am at a loss as to why the umpire in this match did not consistently call a fault for every one of Shibaev’s awful serves. Here is a demonstration of how to do it correctly:

3. The ball is never obstructed by the free hand or free arm (or any other part of the body)

Another way to look at this is from your opponent’s perspective. He or she must be able to see the ball at all times, from the time it is presented in the server’s open palm to the time the server strikes the ball. Old timers may still serve the way they used to before the ITTF changed the rules in September 2002 – the good old ‘under-the-arm’ method, that was employed to devastating effect by players such as Liu Guoliang. In a pre-September 2002 match against Jan Ove Waldner, watch these two legends serve under the arm – legal at the time, but not legal any more.

The ITTF Laws on Service (2.06.05) define an area that must not be obstructed at any time: “The space between the ball and the net is defined by the ball, the net and its indefinite upward extension”. The shape described is a triangular prism. To simplify, take the ball at any time during its flight and draw an imaginary line from the ball to the two net posts. These two lines, plus the length of the net is your triangle and the area above it is the “indefinite upward extension“. Do not obstruct this defined area.

And of course, here is a demonstration of how to do it correctly:

4. The ball remains above the table and behind the end line prior to striking

From the start of the serve and while the ball is in flight and until it is struck, at all times, the ball shall be above the level of the table AND behind the end line. Here is a demonstration of how to do it correctly:

5. The ball is struck as it is falling

Falling is defined as the downward motion of the flight of the ball after it has reached the apex of its flight. The server must strike the ball during this downward motion. Also worth noting here is that the ball must not touch anything from the time it is released to the time it is struck by the server’s racquet. So if your shirt, shoulder, head, hair or anything else touches the ball during this time, it is an illegal serve and a point to your opponent. This actually happened to Wang Liqin in a match against Wang Hao at the 2007 Japan Open. On Wang Liqin’s toss, the ball made contact with his shirt. Showing a high level of integrity, he called a fault on himself because the umpire did not see the fault. Here is a demonstration of how to do it correctly:

6. The ball touches the server’s side, passes over (or around) the net assembly and touches the receiver’s side