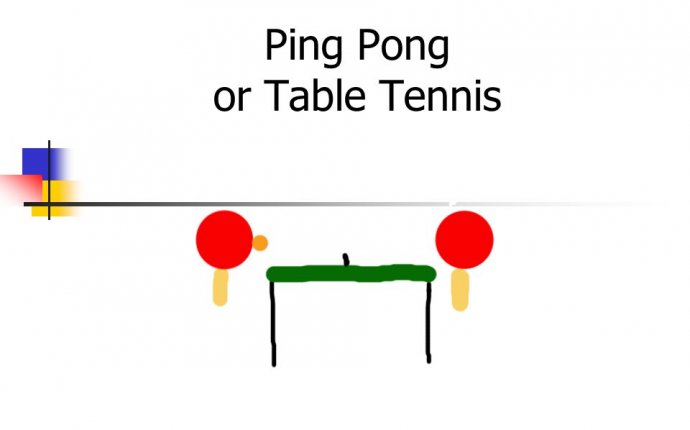 Rules on serving in ping pong

Basic ping pong rules, or to give them their correct title - The Laws of Table Tennis - are the same for both amateurs and professionals, BUT for higher levels of play there are many additional regulations which supplement these simple ping pong rules.

How many of these additional regulations are actually used will depend upon the standard of the competition being played, and whether the organizers have adopted all or any of them.

For now, let's just take a look at a few of the basic ping pong rules you'll need to know in order to play a game with your friends.

Until 2001, a table tennis game was played up to 21 points. But in order to make the game more exciting, have more "crucial" points, and make it more appealing to television viewers, the rules of table tennis have been changed.

A game of table tennis is now played up to 11 points. The winner is the player or pair who first scores 11 points, unless both players or both pairs score 10 points (called deuce). Then a game will be won by the first player or pair to gain a two-point lead.

Before you start a game, you'll need to decide who's going to serve first.

If you're just playing a game with friends, you can use whatever method you like to decide this, but the official rules of table tennis say that it's decided by lot, usually by tossing a coin or disc with two distinct sides.

However, a common method at lower levels of play is for one player (or the umpire) to hide the ball in one hand, then put both hands under the table or behind their back, and then ask the opponent to guess which hand the ball is in.

Although the winner of this usually serves first, he/she actually has three choices:
elect to serve first
make the opponent serve first
decide which end of the table he/she prefers to play at first

If the winner chooses a particular end of the table, his/her opponent then has the choice of whether to serve first or to make the opponent serve first.

If the winner chooses to serve first, his/her opponent then has the choice of which end of the table he/she prefers to play at first.

The server must stand behind the end of the table to serve.

The basic serve involves holding the ball in the palm of your non-playing hand and throwing it upwards.

If your opponent allows the ball to bounce more than once on their side of the table, they will lose the point.

The ball may bounce anywhere on both sides of the table and, unlike tennis, you don't have to serve to one part of the table - unless you're playing doubles.

If the ball touches the net and still bounces on your opponent's side of the table, the service must be replayed.

However, if the ball touches the net and does not bounce on your opponent's side of the table, the server loses the point. The ball is "in play" from the moment that the server deliberately throws the ball up.

When the rules of table tennis were changed to make each game up to 11 points instead of 21 points, the number of serves for each player has also changed.

Service continues to alternate between opponents until one player scores 11 points, unless both players or pairs score 10 points (called deuce).

If both players reach 10 points, then service alternates after each point, until one player gains a two point lead.

White boy @Trevornoah the only rules that goes what USA stand for r coming from the regressive altleft, the same place you r part of